Oops! It appears that you have disabled your Javascript. In order for you to see this page as it is meant to appear, we ask that you please re-enable your Javascript!
↓ Skip to Main Content
Home › Visit Local Sites › Strensall Common SSSI (Strensall Training Area)

Strensall Common is an area of heathland between Strensall and Flaxton to the north of York and covers an area about 660 hectares. It is owned by the MOD and is used for troop training and the southern part as a live shooting range with a protective ‘safety zone’ behind. When not in use the whole area is accessible, otherwise only the northern part and certain other areas can be visited, as explained below.

Strensall Common is one of the rare areas of lowland heath in the York area, primarily on acidic sandy soils and has a range of habitats such as wet and dry grassland, scattered birch, gorse and pine, heather and scattered ponds and marshy areas. The southern part is more open with mown and rough grassland which is used for the firing ranges, but with some areas of open birch and pine woodland. This diversity has meant it has been recognised as an SSSI for its populations of nationally important insects and plants. 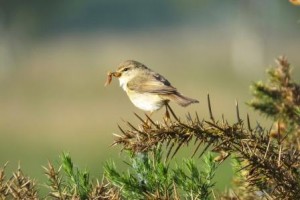 There is a wide range of birdlife with a number of ‘amber-listed’ farmland birds and lowland breeding waders such as Curlew and Snipe. In the spring and early summer the common reverberates with the sound of Sky Lark, Yellowhammer, Linnet, Reed Bunting, Tree Pipit, Willow Warbler, Chiffchaff and the occasional Curlew, Common Snipe and ‘yaffling’ Green Woodpecker. Cuckoos are still frequent with around three males calling each year and a few pairs of Stonechat are resident. Wood Lark were first recorded breeding in 2005 and increased to seven territories in 2006 and are now stable at around three territories annually – listen for their ‘fluty’ song high in the sky on sunny days from March to May. A few pairs of Curlew and Snipe also breed and the “butt ponds” behind the ranges have a colony of breeding Black-headed Gulls, plus Little Grebe, Tufted duck, Greylag Geese, Water Rail, Sedge and Reed Warblers and Reed Buntings.

The winter period is fairly quiet, with only a few Meadow Pipits and Reed Buntings usually present, although there have been occasional sightings of Hen Harrier, Great Grey Shrike and Short-eared Owls, mainly over the northern part. There is a large corvid roost in the central area during this period.

There are a number of interesting plants and animals to find, for example Sundew, Lousewort, Petty Whin, Marsh Gentian and Spotted Orchids are found in some spots and the flowering heather is impressive in August. Watch out for Adders basking in the dead bracken or heather and dragonflies which are abundant around some of the ponds, with glow-worms sometimes showing at night in June and July. The common is also the last site in England for the Dark Bordered Beauty moth which feeds on dwarf willow. Foxes, Badgers and Roe deer are sometimes seen and Water Voles are found on some of the streams and in the marshy flat areas and ponds. 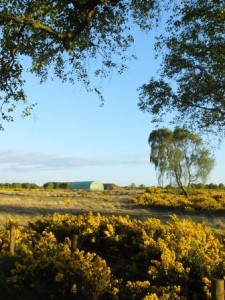 The main parking places are on the road out of Strensall towards Flaxton. The first is at Scott Moncrieff Road, opposite Moor Lane, Strensall, Grid ref SE 636 598 and gives access to the ‘southern part’ and shooting ranges, when not in use.

The other (known as Galtres), is one mile further on past the golf course on the right, immediately after the first cattle grid, opposite ‘Moorside’ Caravan Park, at SE 648 612 and gives access to the northern part, which is normally open at all times.

Display boards for visitors, with maps and notices of firing times, are present at both locations and there are open areas accessible from both car parks, with a sign-posted ‘nature trail’ between the two. For longer, ‘circular’ walks the northern area has paths leading east (on a little metalled track) and south-east (track and paths) from Galtres car park. 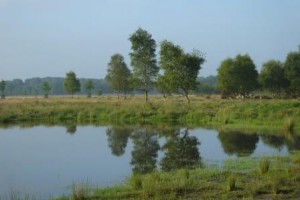 The central/southern area is fenced and is closed normally from 7.30am to about 4.30pm each day, occasionally later for night firing practice. This fenced area has four access gates and these are always locked when access is unavailable, so you cannot physically ‘wander’ into the danger area except from the south-east side so observe the signs/flags there. Friday is normally a maintenance day with no firing, so the whole area is accessible and the gates open.

The southern part of the common is easily accessible by number 5 or 5A bus from York, get off at the Rix garage opposite the camp and walk north-east along Ox Carr Lane, with the Six Bells Pub on your left and the camp housing on the right, until after about 500 metres you turn right at a blue and white sign up Scott Moncrieff Road (opposite Moor Lane).

The YWT has a nature reserve adjacent to this site and further information about this can be found at http://www.ywt.org.uk/reserves/strensall-common-nature-reserve.

The author is always willing to advise on access or other questions about the Common and hear of bird records for MOD Conservation Group and the annual MOD survey.