“Hes East” is the new, eastern campus of the University of York, to the east of Heslington village. It attracts a wide variety of birds, particularly waterfowl, waders and gulls, but also a good selection of other birds. 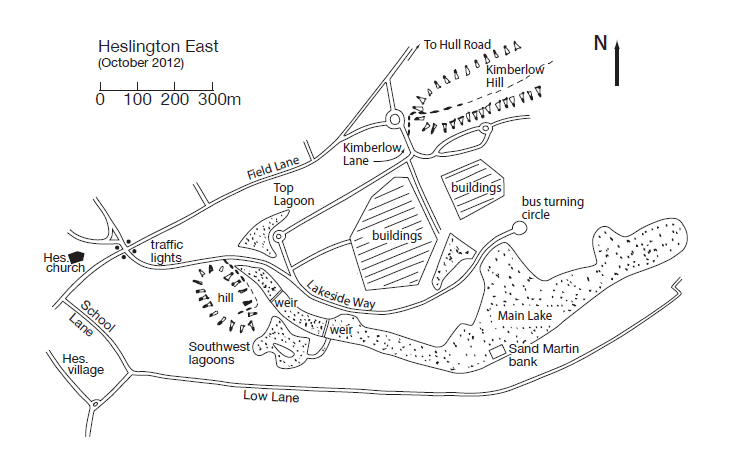 The site is relatively new, and still developing. Before 2009 it was arable farmland. Drainage for the new campus required the creation of a large lake (1.2km long), deliberately shaped to be ‘wildlife friendly’ with a large Southwest Lagoon, shallow margins almost everywhere, and deeper central areas. The landscape round it has been sown with wild flowers to create meadows, and over the site as a whole about 50 thousand trees have been planted. The Top Lagoon lies on the northern edge of the site, and here, and round the Main Lake new Phragmites and Typha reed-beds are spreading rapidly. The whole of the area away from college and departmental buildings is actively managed by the university as a nature reserve.

The site attracts large numbers of resident, passage and wintering ducks and geese. Pochards winter in significant numbers, with a small breeding population. Grey Herons are common, Little Egrets are regular visitors. Little Grebes breed. Gulls use the site all year, and rarer species turn up occasionally. In the early days the bare lake shore attracted significant passage waders, but as the shores have grown over these have declined; never-the-less Redshanks, Greenshanks, Green Sandpipers, Common Sandpipers, Common Snipe and Jacksnipe are all recorded annually. Oystercatchers and Lapwings breed. . There are two artificial Sand-martin banks on the south shore (with over 70 occupied burrows in 2017); on the roof of one of them a pair of Common terns raised three young in 2018 (ignoring tern-rafts on the Southwest Lagoon).

The open ground and remaining areas of waste ground also attract significant numbers of breeding, wintering and migrant passerines, including Wheatears, Meadow Pipits, Skylarks and Wagtails. The Phragmites reed-beds now have breeding Reed Warblers and Reed Buntings. As the woodland planting matures, it has been colonised by breeding Willow Warblers, Chiffchaffs and Blackcaps.

Since 2009 several ‘good’ scarcer species have turned up (e.g. Black Tern and Little Gull), but so far no national rarities.

The new meadows support a good range of butterflies; particularly notable are Common Blues and small populations of Southern Brown Argus. Dragonflies and Damselflies are increasing as the lake matures, and include Common and Ruddy Darters, Emperors and Black-tailed Skimmers. Brown Hares are very common.

There is no public parking on Hes East. There is a small parking area on the road in front of Heslington Church (limited to 2 hours Monday-Friday 08.00-18.00). The numbers 66 and 66a buses from York stop at Heslington Hall, which is a five-minute walk from the north-west entrance to the site via the cross-roads and traffic lights shown on the map. Bikes are a great way to get to, and round the whole area. Otherwise, visitors can walk anywhere that is not clearly fenced off, but to minimise disturbance keep away from the edge of the lake.