Oops! It appears that you have disabled your Javascript. In order for you to see this page as it is meant to appear, we ask that you please re-enable your Javascript!
↓ Skip to Main Content
Home › News & blog › Page 12 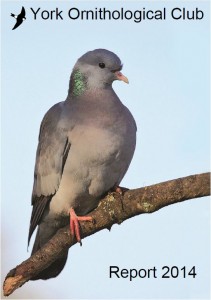 In addition to the systematic list of records in the YOC Recording Area, the report contains a number of articles: LDV rare breeding birds report, the ringing report, an article about Hassacarr nature reserve, a report on a rookeries survey, Peregrines in the YOC area including those on the Minster, Vis Migging in the Vale of York, two decades of the BBS and an obituary of Mike Williams, our late editor.

YorkOCPosted on 4th November 2015 Posted in Trip Reports
Ten members went on a long weekend to  Northumberland based on Seahouses from 23rd to 25th October. Unfortunately the recent easterly winds had changed into the west a few days before and most of the migrants had moved on. The bad rain forecast for Saturday did not occur and a total of 94 species were seen. On Friday most members went to Stag Rocks, Budle Bay and Bamburgh Woods. Saturday was a visit to Holy Island as well as Budle bay again and Fenham Flats. On Sunday Newton Pools was visited as well as East Chevington, Cresswell Pools,Druridge Bay, Cresswell Pond and Broad Sand Rocks, Cresswell.   Highlights were the numbers of flocks seen including feeding frenzy of Gannets and Cormorants, 38 Whooper Swans. At least 43 Red Throated Divers from one point in Druridge Bay. Waves of Pinkfoot Geese, Brent Geese, Barnacle Geese, vast numbers of Teal and Wigeon.  Other birds included long views of Merlin and Peregrine. Good numbers of Snipe, Kingfisher and Stonechat. Also Goldeneye, Blackcap, SE Owl and Velvet Scoter and waders.
Peter Watson

The Lower Derwent Valley blog has been updated with a summary of sightings from September at http://ldvnnr.blogspot.co.uk/p/blog-page_29.html. Visit the post to read about what was sighted and ringed. Highlights include a continental Great Spotted Woodpecker of the race D. m. major.

The YOC report for 2014 has been printed and will be available to members at the meeting on Tuesday 3rd November. For those not able to attend, it will either be held to December or posted out depending on numbers (to be confirmed). For non-members, it will be available shortly after to purchase, look out for the message on the website home page.

YorkOCPosted on 17th October 2015 Posted in Trip Reports
The club’s East Coast trip headed for Spurn today with 10 people. First stop was the Easington cemetery but that was quiet so then on to Sammy’s Point where there were large numbers of Goldcrests in the bushes. On the Humber there was a Mediterranean Gull, we also saw Short-eared Owl and Stonechat.
Then to Kilnsea where we eventually had good views of the Richard’s Pipit and further very close views of the large movement of Goldcrest. We dashed back to Easington to try for a reported Pallas’s Warbler without success. After lunch we walked the Triangle, picking up Ring Ouzel, Redwings and Fieldfare. A couple of the group saw Merlin at the Warren and sea-watching from there was quiet though Red-throated Divers and Red-breasted Merganser were seen.
Then back at the Triangle we had good views of a Chiffchaff showing characteristics of the Siberian race, a Redstart and many more Goldcrests, some feeding on the lawn of Cliff Farm. A late attempt for an American Golden Plover was thwarted by the terrain and failing light. So a day of hits and misses, most notable for the incredible number of Goldcrests.
Rob Chapman

The new Yorkbirding website is now on the internet as of a few minutes ago. There are some functions that are not working just yet so do please bear with us while we iron out these glitches. At the moment there is a problem with buttons [now solved] and the contact forms need some work to sort out. The website domain needs to propagate around the internet so sometimes you get taken to where it was registered previously.

A decision on whether Hassacarr Nature Reserve in Dunnington, run by YOC stalwart Terry Weston, will be given Local Nature Reserve status is due soon. See the article in the York Press today. Good luck with getting the right decision, Terry.

As not much had been reported in the region aside from passage birds over the sea, we decided on a round trip for the day starting off at Flamborough lighthouse and ending at North Cave Wetlands (the advertised destination).
13 of us started off sea watching at Flamborough Head – 3 hours in lovely conditions for us (seriously – not too breezy, sunny and way warmer than expected) yielded several Sooty Shearwaters, a couple of Skuas – one was definitely Arctic, but there was debate amongst other birders around us as to whether the other was a Pomerine (reading the Flamborough list from Sunday, 1 Pom was seen going South).  A few Manx Shearwaters went past, but all of us missed the single Storm Petrel, though we were there at the time!  At least 12 Red-throated Divers went past and possibly 1 Great-Northern Diver,  4 Velvet Scoter, Sandwich Terns, Shags, Kittiwakes and a number of Little Gulls.  Gannets predominated, as expected.  The conditions were too good for an impressive passage (but watching was much more pleasant!!) and it was even quieter after 10.30 am.

We headed on to South Landing – where Lesser Whitethroat and a small flock of Siskin were the best additions to the list along with a flock of about 60 Common Scoter in the bay.  Then on to Hornsea Mere where there had been a report of a Red-Necked Phalarope – sadly gone long before we got there – however we had great views of Little Gulls really close in (including youngsters) – both feeding over the water and perched up on the jetties by the boats and more difficult (sunlight on water making it tricky) views of Red-necked Grebe. We decided not to carry on to North Cave Wetlands and to watch the Little Gulls come in to roost instead – only to get booted out of the car park at 5.30pm!   We ended the day with a fruitless search of the seafront for interesting gulls (Little or otherwise).  So, a relaxed day’s birding in warm sunny conditions and a list of about 61 species seen.

Despite the rain and black clouds overhead, 17 of us joined John Lawton on the Club’s evening walk round Heslington East last night. It was great to be joined by new members of the club too.  Apart from one notable exception it was relatively light on the bird species count (and all the insect life was firmly out of sight in the cool damp conditions).

John showed us how he ‘works’ the site to best advantage, at each stage describing how the site has been developed and what the University has done and is intending to do to preserve and encourage the widest range of flora and fauna possible. The only wader of the night was one Green Sandpiper (which was only picked up because it flew past the ‘scope’ as Jane was  scanning the far end for grebes!) which landed on the furthest part of the main lake from us and was sadly not picked up again when we got closer.

The real surprise of the night was the size of the Greylag flock – not only was it a great spectacle seeing several hundred fly in to join the flock already on the lake – when counted there proved to be an astonishing 870 there; to put this into perspective, the previous highest count was around 450 last week and before that, 420 in 2013. 169 Canada Geese, 1 Egyptian Goose, 2 Mute Swans and their Black Swan companion were also swimming about with them, as were 11 of the feral flock of Barnacle Geese (the latter more often seen at Hes West).
The University’s  Snow Goose flock (32) flew over the lake too (not seen often at Hes East, they usually stay on Hes West), heading off in the direction of the playing fields/golf course.
30+ House Martins were feeding over the fields bordering Low Lane and School Lane, Heslington (near the upper end of the lake)
1 Teal was with c. 90 roosting Black-headed Gulls on Top Lagoon
8 Little Grebes (including 1 well grown juvenile) were counted on the upper and main lake.
1 Cormorant, 5 Grey Herons, 11 Tufted Duck, a handful of Goldfinches, Coot, Moorhen, Woodpigeon, Mallard, a couple of Skylarks, and Sand Martin (still visiting row 5, hole 2 to feed young) were also seen.

Rain and rapidly fading light brought the walk to a close earlier than hoped, but everyone appeared to enjoy the walk and the opportunity for many to find out more about a site they have not birded at regularly before.
Many thanks to John for taking us around and for giving us all the background information.

This was posted to the Yorkbirding Googlegroup by Craig Ralston.

Belated news from yesterday (12th) of a juv Aquatic Warbler caught and ringed at Wheldrake Ings as part of the ongoing warbler/migration monitoring work being carried out by NE, the local ringing group and YWT.  Obviously not seen again follow its release – the belated news comes following careful consideration and confirmation of ID features and discussions with the trust. It also comes hot on the heels of the Barred Warbler caught and ringed there last August

It follows two others caught and ringed elsewhere in the country this week – in Suffolk and Guernsey (9th). Needless to say it’s the first record for the LDV and wider YOC area and a notable Yorkshire record, especially away from the Spurn area!  Good numbers of warblers are presently on the move through the valley

Get local news on email